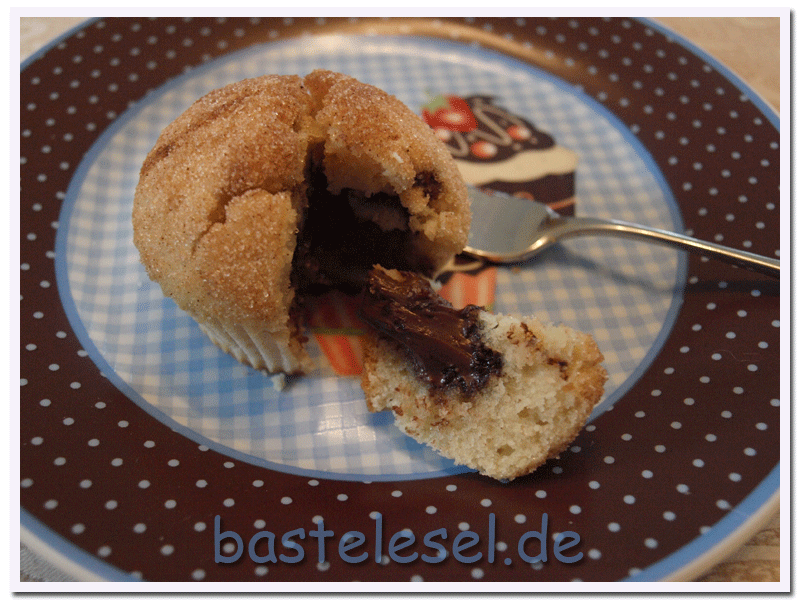 Autumn’s approaching – at least in Europe – and with it the joy to spend some more time in my kitchen. Today I’ll propose you a real indulging recipe for all those who love nutella. A mellow cupcake with a creamy nutella filling and a sugar-cinnamon crust. Easy to make and delicious when eaten lukewarm.

Mix flour, sugar, cinnamon, nutmeg, baking powder and salt in larg bowl.
Put milk, cooking oil, egg and vanilla sugar in a seperate bowl and stir until well combined. Pour this mixture into the first bowl and stir with flour and other ingredients. Pour some batter into your muffin molds to cover the bottom, add a teaspoon of nutella to each and then cover with batter again. Bake in the oven for 15-20 minutes until done. Then place on a rack to cool for 10 minutes.

Melt butter. Mix sugar and cinnamon in a shallow dish. First dip cupcake tops in melted butter and then in sugar mixture. Put them on your rack again for cooling. If you like it sumptuous serve them with a dollop of whipped cream.

Being among those feeling uncomfortable with the sweetness of nutella you may replace it by canned blueberries.