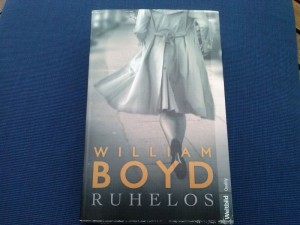 Restless, published in 2006 and winning the Costa Book Award the same year. A spy thriller but not in the classical meaning. in 1976 single mother Ruth Gilmartin gets the records of her own mother. These reveal that her original name is Eva Delektorskaja and that she was working for an intelligence service during World War II. In 1939 she was recruited by Lucas Romer shortly after the death of her brother. To her husband and daughter she had always hidden her real identity but now she feels pursued and threatened and shares her past with Ruth.
A story being suspenseful till the end and yet without any lurid scenes and descriptions. The prospect that it is possible to completely hide one’s original identity makes us pause a moment. Rather shocked we must admit while reading that we only know our fellow men as well as they allow us to do and this is even true for our mother.
A really nice book for all those who love tension but like to abstain from brutality and aggression.
William Boyd was born in Ghana in 1952. He is now living with his wife in London and the South of France. The several times awarded author ist writing short stories, screen plays and novels.