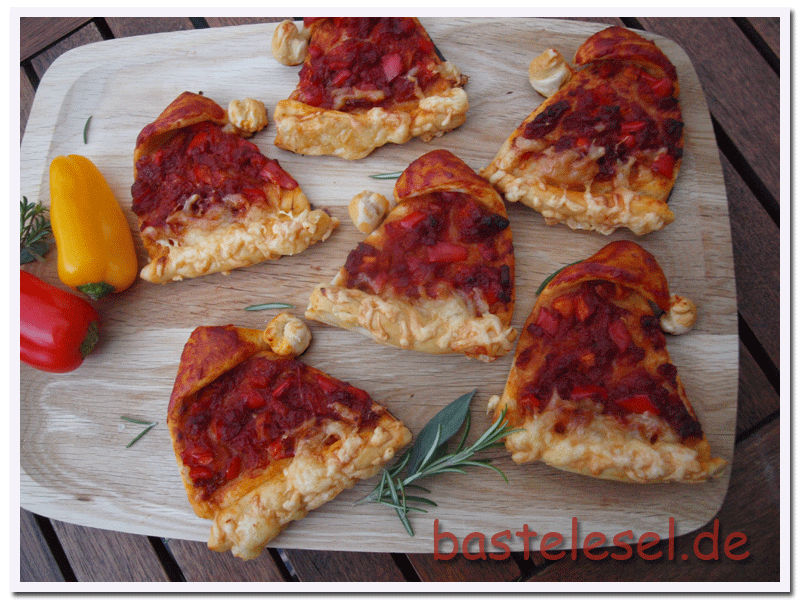 The traditional italian pizza in a Christmas outfit – in other words in the shape of Santa’s hat. Take any covering you like as long as it is red. In our case it’s red peppers, salami and lumpy tomato sauce.

Flatten the pizza dough and roll out a rectangle that should be divided into stripes 10cm wide. Then cut these stripes into 12cm long segments and those diagonally in halves. The dough surplus when cutting the dough plate will be taken for the hat’s border and the bobble lateron. Continue decorating the dough pieces directly on a baking tray or a pizza stone because it’s diffcult to move them when decorated. 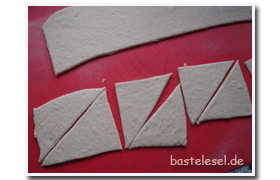 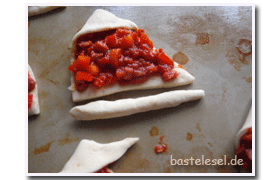 Fold the triangle’s upper tip to the sloped side to look like a hat’s end. Then spread the pizza covering and leave a gap of 1cm at the hat’s bottom. Take some of the dough remains and form a thin roll which needs to be divided into 10cm large strips. Flatten their ends lightly. 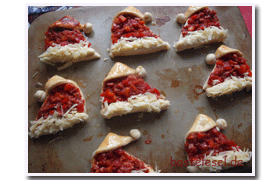 Apply some whisked egg yolk to the hat’s stripe and put the dough roll on top, press it down lightly and fold its’ ends under the hat. Some further whisked egg yolk on top of the roll will keep the ground cheese, thus it looks like a fur border. Then spread some egg yolk to the tip of the hat and place the bobble. Now they’ll go into the preheated oven (200°C) for 15-20 minutes. If you’re a perfectionist apply some tomato paste mixed with the egg yolk’s remains to the hat points after you removed them from the oven. I did it with one of the hats before cooking them but the tomato paste became too hot and looked very brownish afterwards. These hats are a funny snack for a chummy meeting during Christmas season.