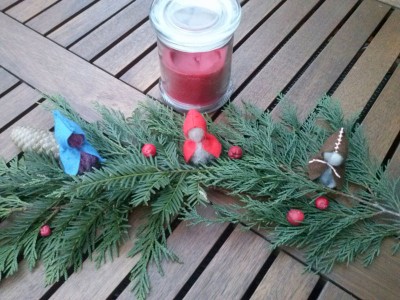 The traditional colours for these little felt dwarfs are red and white. Today I’ll suggest some other felt colours and another felting wool colour too. Draw hoody along breaking line on chosen felt according to pattern , cut out and sew top with backstitch. To close cape insert a thread with running stitch just below the hood and leave about 4 inches on each side to be knotted later. Then turn cape, take a skein of wool (about 5-6 inches) and make a knot in the middle of it. Now turn one loose end, place it over the knot and place the little figure under the hood. Arrange “head” and “body” beneath the cape and then fix the threads hanging on both sides of it. If necessary the wool at the bottom of your little dwarf has to be trimmed. If you want to suspend it on a little branch you need to fix a thin thread at the tip of its hood. The hood may also be closed on its outside with a button hole stitch. I’ve taken a bright stitching yarn for this and also for the closure of that little cape. I left 0.4 to 0.7 inches hanging down from the knot so that it looks like a little shawl.