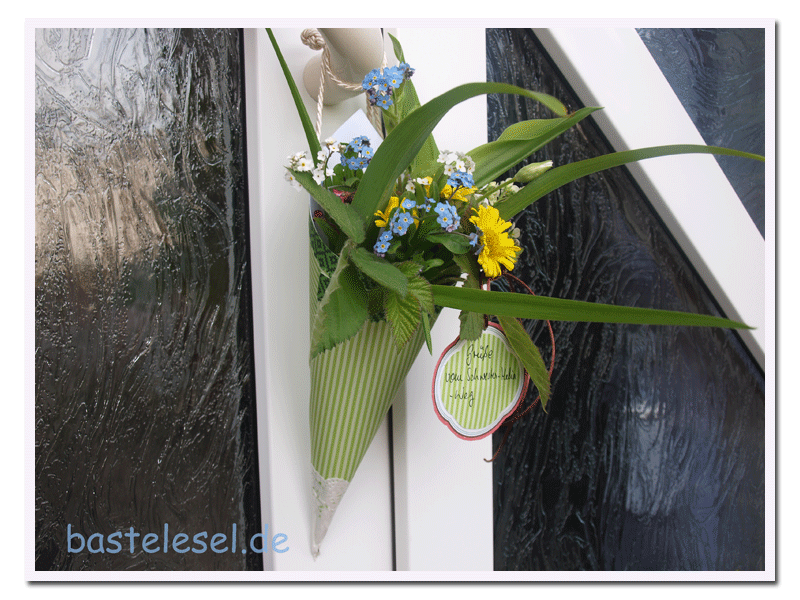 Lots of customs and fairytales are referred to the night between 30th of April and 1st of May.  In Germany we’re “Dancing towards May”, in France people celebrate “Beltaine” on 1st of May. Beltane, Beltaine or Beletene is the beginning of summer in the Irish calendar. All over Europe people are talking about the night of witches. (Walpurgisnacht in German, referring to an english abbot living form 710-779 called Walpurga who was canonized on 1st of May) In many places people put up a maypole. It’s cut in the forest and put up in the center of town or village thus symbolizing nature’s fertility coming to mankind. In Rhineland young men put up a ribbon decorated birch tree in front of the house their seetheart’s living in.
Browsing the web I found a lovely custom mostly celebrated in the USA. A cardstock cornet is filled with flowers and attached to a neighbour’s door knob without beeing noticed. If the neighbour catches you red-handed he’s a allowed to ask for a kiss from you. Well, even if you don’t have a neighbour you’d like to kiss when caught I liked the idea and immediately made such a cornet. I’ll hang it up either at the door of a neighbour I don’t know that well yet or at a good friend’s entry. You may even offer it personally as a gift because it looks quite well at a room or cupboard door. 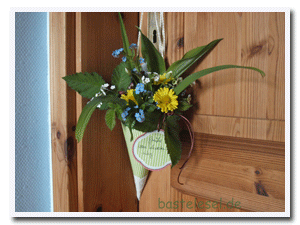 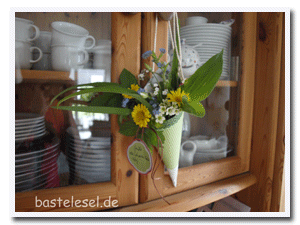 It’s quite easy to make such a cornet. Take a rectangular card stock and twist a cornet beginning at one corner of a long side. Fix both, the inner and outer corner with a drop of glue. Punch two holes into the upper tip to pull through a ribbon to attach the cornet at the door knob. Decorate your cornet with paper stripes, doily, stickers or other accessories. Using the same card stock I made a nice label to write down my greetings. For my “showcase” I cut some flowers in my garden and placed them in a small plastic cup filled with water. The cup’s completely hidden in the cornet but the water prevents my flowers from shrivelling. If you want to attach a cornet to your neighbour’s door you may very well take a bouquet and put it in the cornet after watering the stalks. The recipient will surely place them in a vase and probably use the cornet lateron. 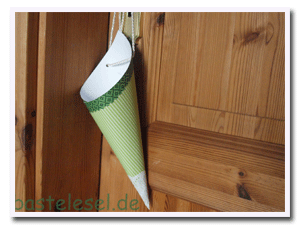 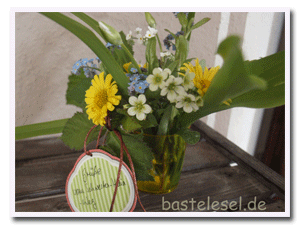